One way of communicating about the archaeological past to a broader public, is by making visual representations. For our research project Putting Life into Late Neolithic Houses, archaeological reconstruction illustrator Kelvin Wilson is bringing to life those times long gone.

An archaeological reconstruction illustrator translates what once was minutely excavated into visualization manageable for an outside public. He puts the sherds of a broken pot together and recreates its former function. He is able to revive the faded colours and decoration patterns on pottery and repairs the cracks of broken glass. He builds houses out of what are now mere discolorations in the soil, and turns them into a home. He is the builder, the potter, the smith, the glassblower, the textile worker and the one with oversight over people’s life from birth to the grave.

In our research project, Kelvin Wilson is the archaeological reconstruction illustrator, or – as he describes himself – a storyteller. The storyteller seeks to present a mood and a setting into which the archaeology fits — to give an impression of a given moment in time, and share it with his audience. The snapshot can be of Mesolithic children playing in the sand, a Medieval ship’s crew battling stormy weather, or one Neolithic individual’s job on creating a dugout.

Although it might seem that the viewer is looking at the artist’s own subjective impression of the past, the drawings are always based on scientific knowledge — with the artist’s imagination ending not far past the point where the facts begin. The repaired pottery he draws, is indeed present in the archaeological record (fig. 1). As for the natural environment, everything the artist paints (from the omnipresence of the ferns to the scattering of birches) is based on what the botanists concluded from the paleobotanical dataset (fig. 2). This doesn’t mean that visual representations of the past are mere catalogues of the archaeological finds put into a resuscitated context. The focus in Kelvin’s illustrations remains with the more transient character of people, with the archaeological finds as their attributes. This is completely different from technical drawings in catalogues or encyclopedias in which the object is mostly considered a prototype, and its function in life is rendered perfect as under a bell glass. Instead, Kelvin draws past worlds as the homes of people in flux. One could say he is an anthropologist, studying past peoples by means of a pencil. 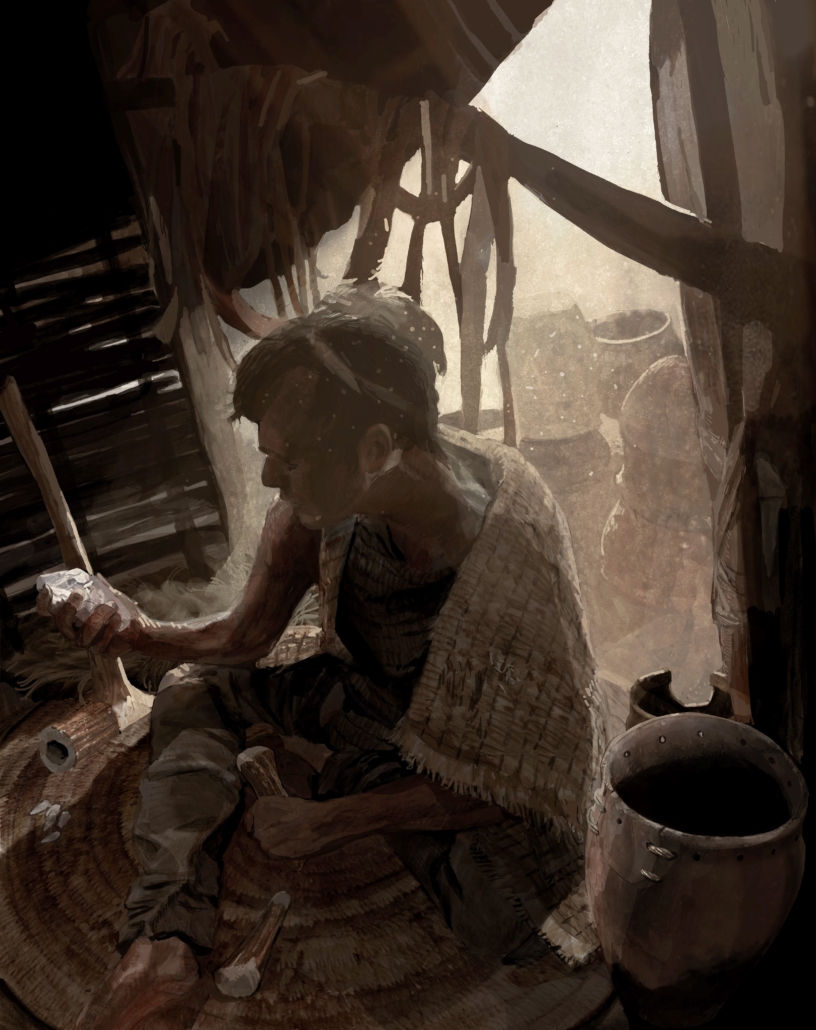 1. An impression of a Neolithic interior, (Drawing: Kelvin Wilson)

The advantage of having a reconstruction illustrator in the research team, is that he draws our attention to those things we have not been able to excavate: the colour of hair or eyes, or what clothes people might have worn. Details, perhaps, yet very important in accurately representing the past. After all, our work in retelling the stories of the past doesn’t end with the assemblage of the archaeological remains, it begins with the visualization of them.