In December 2021 a number of researchers of the ‘Putting Life into Late Neolithic houses’ project gathered in Masamuda for the first series of cooking experiments.

Cooking and food preparation was most likely an important part of the daily life of the Vlaardingen people and as we are fascinated by the details of their life, cooking is of great interest to us. Food and cooking are also important from an educational viewpoint: people are often curious about food and there are many clichés about prehistoric food and eating habits. Who doesn´t know the image of the hairy primal man dressed in leopard skin and roasting a whole animal over a flaming fire?

What has been found?

The Vlaardingen people left behind a large number of utensils that surely would have been used in the ‘kitchen’. There are (broken) pots and baking plates of pottery, grinding stones of granite and sandstone, and of course, flint tools that would have been used for cutting up ingredients.

The pottery vessels, in particular, have much to tell us thanks to the possibilities of food residue analysis. Everybody must have experienced, at least once in a lifetime, the burning of food during cooking. It was not different in prehistory. The evidence of these unfortunate cooking events is preserved on pottery sherds in the form of burnt food crusts, which can under favourable conditions be preserved through thousands of years. These burnt crusts are considered to reflect the original vessel contents, the last or one of the last meals cooked in that particular pot. Through the studies of the archaeological food crusts, we can understand how people, in prehistory, prepared their daily meals. For example, if tiny fragments of cereal grain are found embedded in food crusts, then it is very likely that a cereal-based meal was cooked. If the grain remains are accompanied by fish scales, we can assume that cereal-based porridge was cooked together with fish.

The Vlaardingen people fired their pots at low temperatures, resulting in porous pottery. Certain elements of food, like fat or proteins, are caught in these pores and can be studied as well. These two types of food residues, encrusted on sherds as surface residues and the residues absorbed in the walls of cooking vessels, can shed much light on what and how people in the past were preparing in their kitchens.

The setup of the experiments

When we designed the experiments we had a number of goals in mind. The experiments were to be the first of several and were meant, first and foremost, to lay a foundation for future experiments. One of the objectives was to understand how foodcrusts like the ones that were found archaeologically are formed and if there are one or more ways of foodcrust formation. For this experiment, we used plant foods that are represented in archaeobotanical assemblages from Vlaardingen Culture sites like emmer wheat, flax, and acorns. Emmer grain particles were already discovered in archaeological food crusts from one of the earlier studied Vlaardingen Culture sites, Den Haag Steynhof, indicating that emmer-based porridge was cooked long ago by Vlaardingen people.

All cooking was done in handmade pots, made especially for this experimental cooking (see Figure 1).

As it is not yet known where the Vlaardingen people got their clay, a modern prepared river clay was used to make the pots. As the Vlaardingen people mixed their clay with crushed quartz, this temper had to be prepared first. Small pieces could be crushed easily between two stones, but larger pieces were first heated in a hot fire and then thrown in the water to cause fractures in the stone. After crushing the quartz to the right size, the clay was mixed with 12% of this temper.

Research of Vlaardingen pottery has shown that the bottom of the pot was made from a small bowl shaped from one piece or ball of clay. Then the walls were built up using thin rolls. Because wet clay is soft, the potter has to wait often to let the clay dry out a bit to avoid the pot collapsing under its own weight. Six pots were made based on the general Vlaardingen Culture style with fairly narrow bottoms and S-shaped walls. This shape was later refined by beating gently with a piece of wood. The last step of the process was smoothing both the inside and the outside with the hands. Then the pots were left to dry for two weeks before they were fired in a modern oven at 725﮿C.

The experiment took place on a fairly cold, windy day in December. Because of the restrictions due to Covid, we couldn’t work inside the reconstructed Vlaardingen Culture house. A long fire was lit and the pots were put on the fire with one side facing the flames.

We cooked three Vlaardingen-style meals. We used three pots and cooked each meal once until the food crust was formed in each pot. 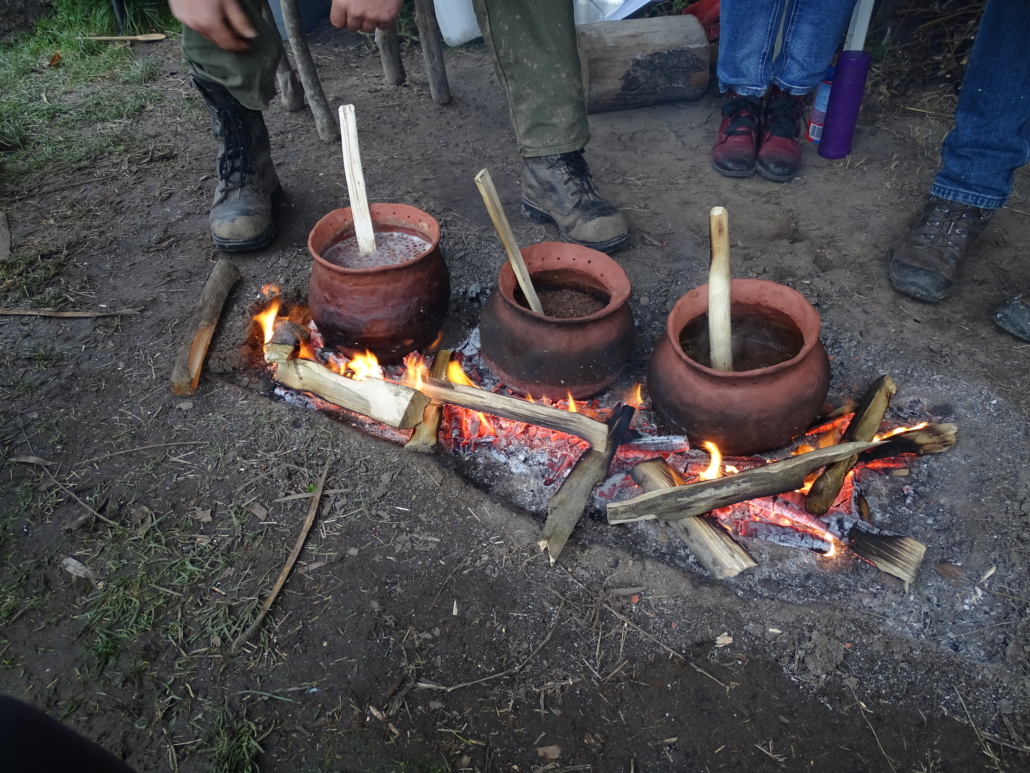 In POT 1 we cooked fish with guelder-rose berries (Viburnum opulus).  This dish was cooked as a kind of soup. The fish was cut in large chunks and the berries were added whole. When the soup was simmering, a layer of foam appeared on top of the soup. This accumulation of foam created a thin patina-like layer of fatty whitish residue in the rim area of the pot (see Figure 2). At the end of the experiment, we drained the soup and heated the fish and berries without water in the pot, to imitate the soup boiling dry. This way, we created a thick layer of charred food crust on the walls of the pot. 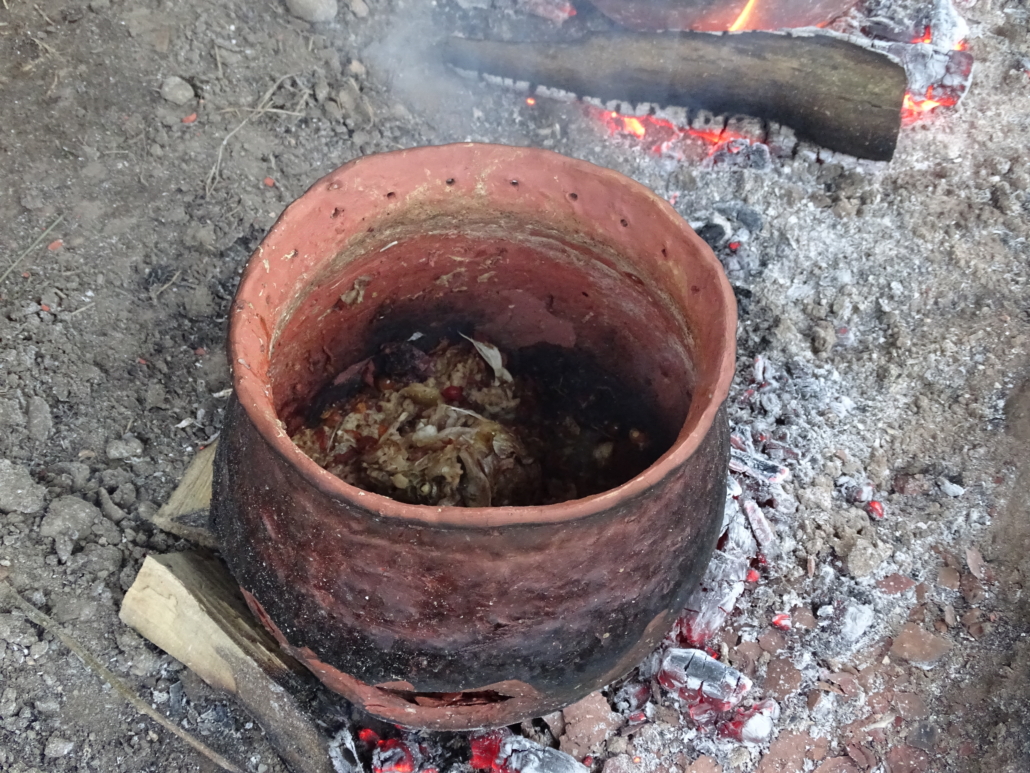 In POT 2 we cooked a porridge-like meal based on emmer wheat and flax seeds (also known as linseeds) with the addition of water. We used a mixture of fine and coarsely ground emmer grain and coarsely ground flax seeds. Some emmer chaff entered the cooking pot together with the portion of grain (as often observed in archaeological food crusts). It proved easy to create a thick layer of charred crust in this pot by not stirring and not turning the pot very often (see Figure 3).  Also, the fact that this emmer-based porridge absorbed the water relatively fast contributed to the formation of the food crust in a relatively short time. 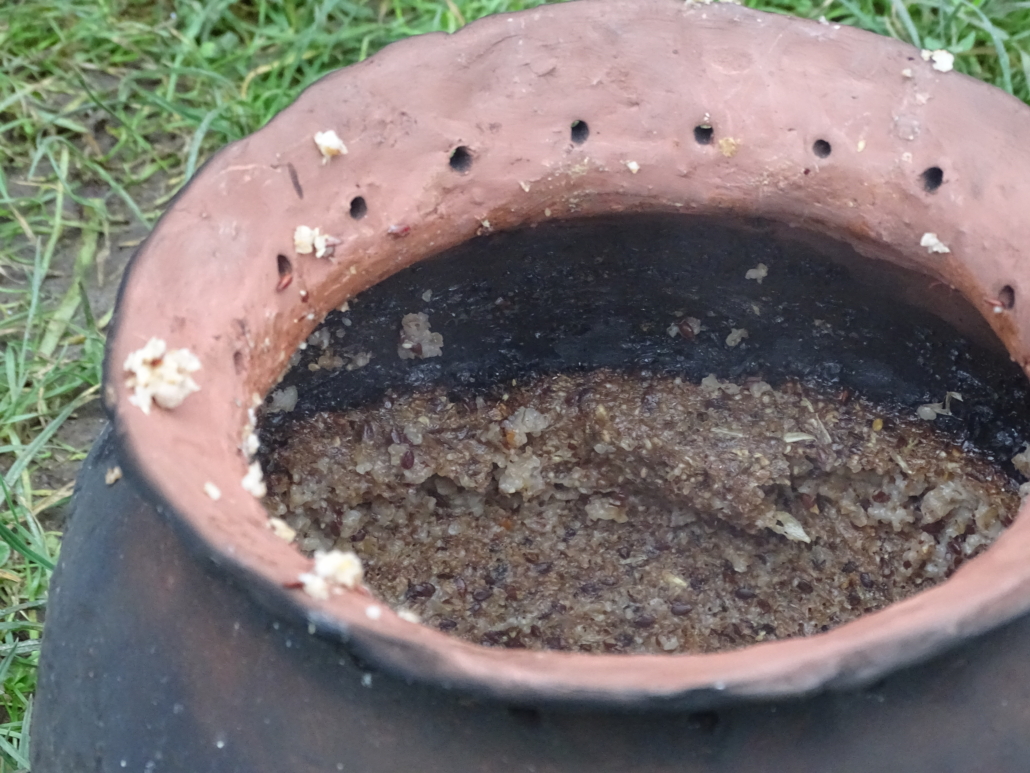 Fig. 3: POT 2. Porridge-like meal made of emmer grain and flax seeds. The accumulation of the charred food crust on the inner walls of the pot can be observed. (Photo: L. Kubiak-Martens/BIAX Consult).

In POT 3 we prepared acorn mush with rose hips and crab apples. First, the acorn shells were removed, then the acorns were ground into a coarse to a fine fraction.  Prior to cooking, the crushed acorns were soaked in six changes of cold water over three days. This process, called cold leaching, is required to remove bitter tannins and to make acorns palatable. We had planned to cook this acorn mush until all water was evaporated and/or absorbed resulting in the pot boiling dry. This proved to be a very long process, as the acorn mush does not absorb water very well, and remained liquid for a long time, contrary to emmer and flax porridge which absorbed water relatively fast. Still, in the end, a thick crust of charred acorn mush accumulated on the walls of the vessel (see Figure 4). 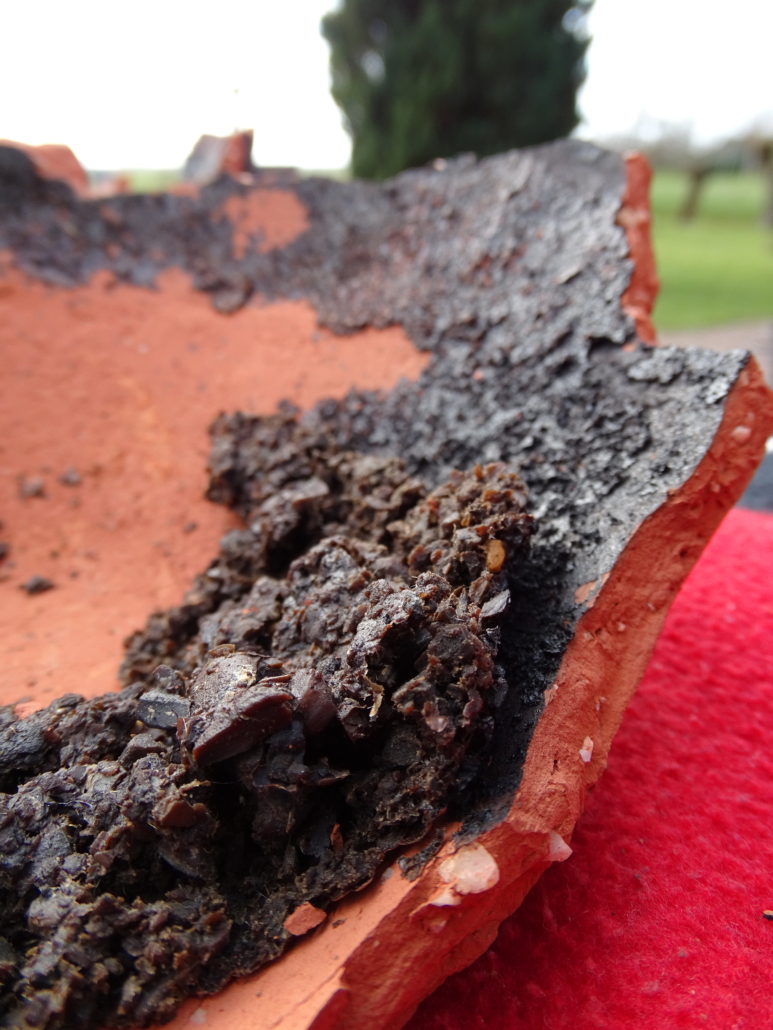 The experiments were a success. We made crusts in several ways and from authentic ingredients. These crusts will be analysed to provide reference material for future work. The crusts which were formed during experimental cooking were similar to the prehistoric food crusts, however, there was one big difference: the prehistoric crusts are often stuck to the pots while the experimental ones became detached from the pots’ walls when the pots were broken (see Figure 5). It was decided to bury several large sherds with crust to determine whether the deterioration in the ground would have a role to play in this matter. 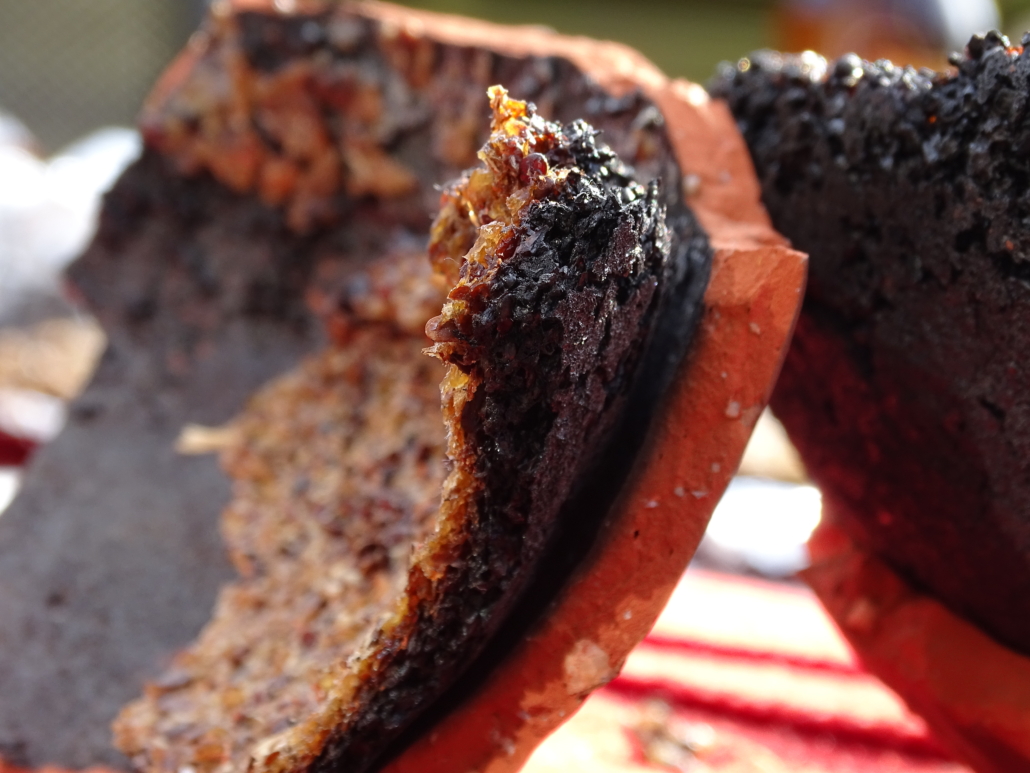 Fig. 5: The experimentally obtained crust of emmer and flax porridge-like food, detached from the wall of the pot. (Photo: L. Kubiak-Martens/BIAX Consult).

One other ‘finding’ was about the practical use of Vlaardingen-style pottery. The pots, even though they were often turned so they were heated on all sides, were damaged as large, round flakes popped off the walls. When we compared these with sherds that detached themselves from pottery during firing in an open fire it was concluded that the cause was most probably heat stress caused by the cold winter wind. Thanks to potter Ton van Grunsven who helped us understand what had happened. So we learned something besides making crusts: Vlaardingen people probably didn’t cook food in their pots out of doors on windy winter days.

How to finish your axes? Experiments with the final stages of the production...
Scroll to top