On 16 September, the dugout – or boat made from a hollowed log – was launched at Natsec, a canoe club near the Vlaardingen cultuurhuis (figure 1). The making of the dugout, which is part of the research project Putting Life into Late Neolithic houses, started in June 2021 and lasted through July 2022. Starting from an oak tree, it took the volunteers of Masamuda 30.433 minutes, or 507 hours, or more than 21 entire days to finish the dugout. During those 507 working hours, the volunteers performed no less than 516 experiments with various tools and had to register every experiment on paper (figure 2). 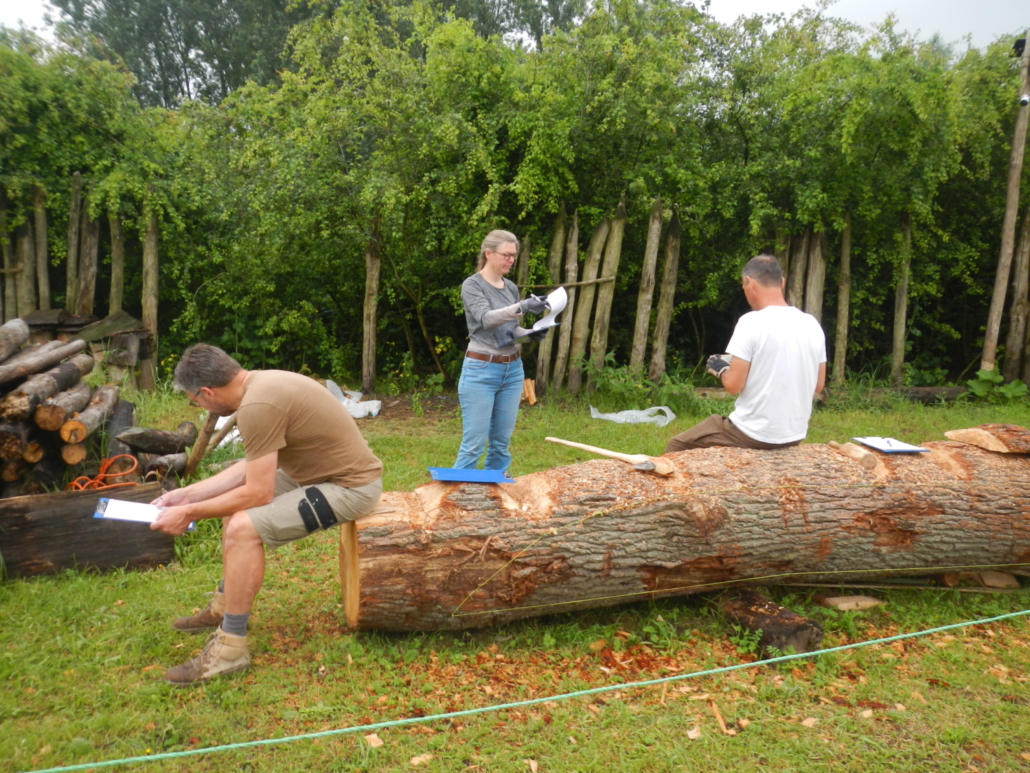 The volunteers, of which the majority had no previous experience in making a dugout, worked exclusively with a Neolithic toolkit. Such a prehistoric toolkit consists of axes and adzes, wedges made of antler, chisels of antler or bone, and flint scrapers. In addition to the dugout, they also made paddles from ash tree.

The Putting Life team wishes to thank the volunteers for their effort, endeavor and dedication in making the dugout.

On the 22nd of October 2022 we hosted a hide-working workshop for the volunteers of Masamuda. The workshop was aimed to gain insight into hide-working traces on Vlaardingen Culture (VLC) scrapers. On the VLC site of Hekelingen III several scrapers were found with hide working traces which potentially could be linked to the scraping of fatty hides with the use of additives (Van Gijn 1990). To test this hypothesis, we scraped two sealskins with flint scrapers using additives. One hide was scraped with sand while the other was scraped with dried clay. The sealskins were donated to the project by Zeehondencentrum Pieterburen, a seal rescue center. These skins belonged to weaners, common seals (Phoca vitulina), who died of pneumonia, the skins were removed during the autopsy. We chose to use sealskins because these are notoriously fat and because seal bones were found both in Hekelingen III and in Vlaardingen (Brinkkemper et al. 2010).

Unlike most mammals, seals have a thick layer of blubber (fat) below their skin. The first step in the hide-working process therefore consisted of removing the layer of blubber (see figure 1). We did this using unmodified flint flakes. The sharp edges of the flakes proved to be effective tools for this task. It took the volunteers approximately two and a half hours to remove the thick layer of fat. 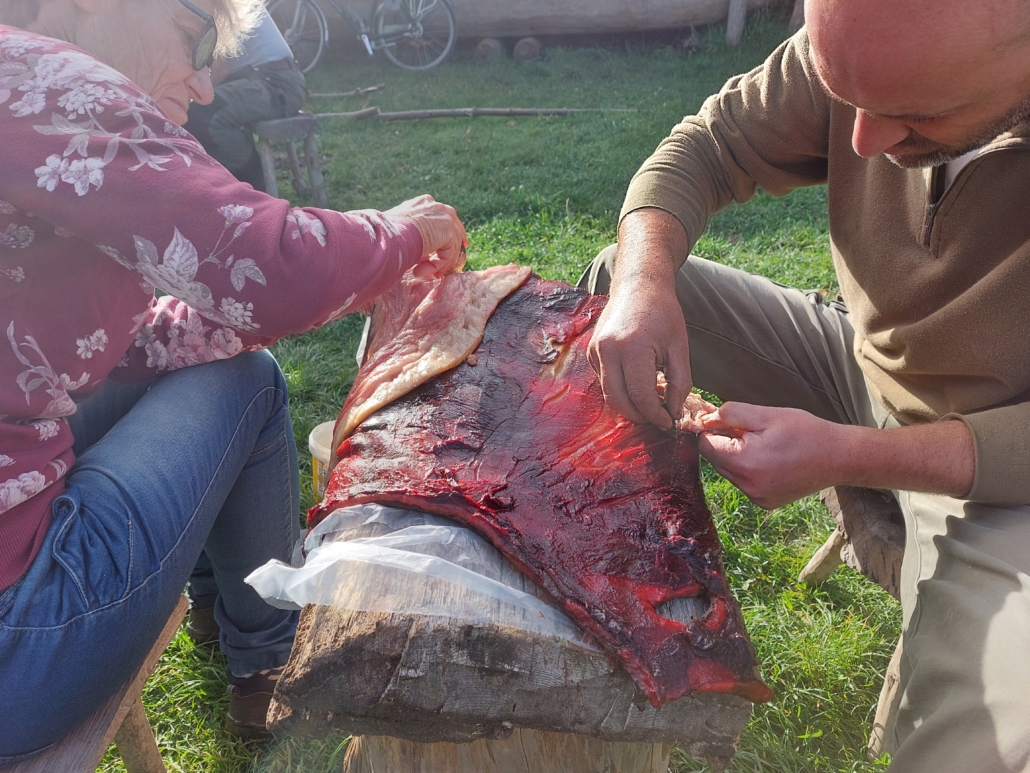 Figure 1. Removing the layer of blubber with flint flakes.

Once the layer of fat was removed small incisions were made in the skins to facilitate stretching them in a frame. The skins were stretched in a wooden frame and laid down in the grass for further processing (see figure 2). 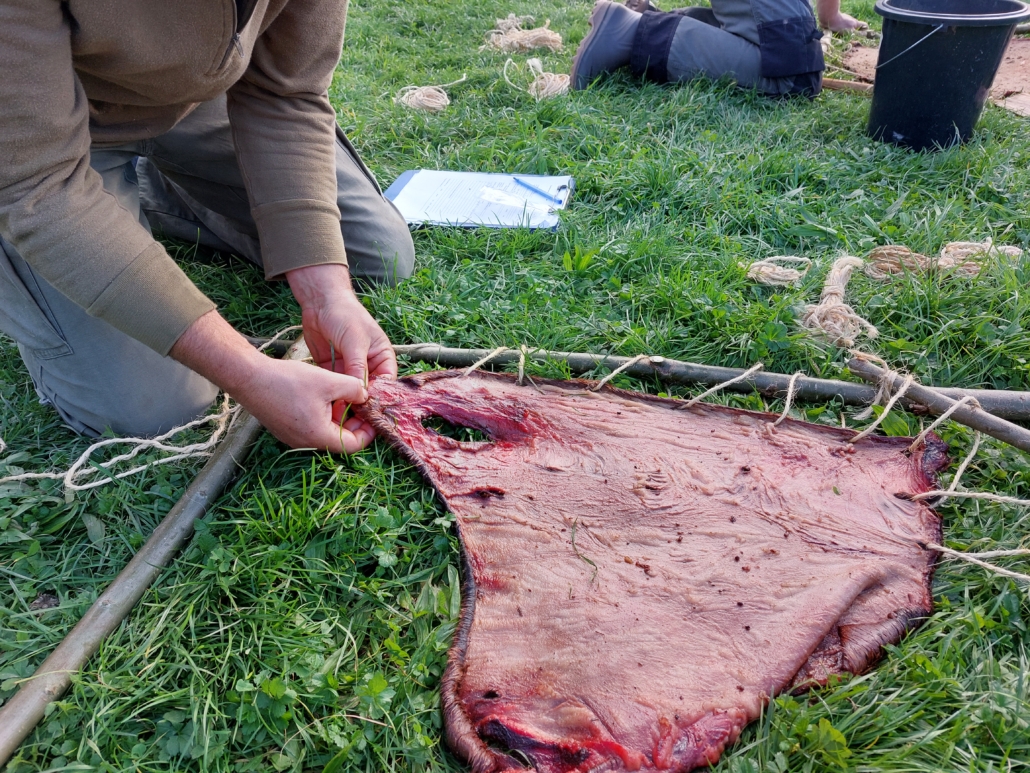 Figure 2. Framing the seal skins in a wooden frame.

Now the entire skins were covered in additives which were added to absorb the fat (see figure 3). One skin was covered in sand while the other was covered in ground dry clay. After this, the hides were scraped with flint scrapers which were hafted in a wooden haft (see figure 4 and 5). The hides were scraped for approximately fifty minutes. It could be noted during the process that the scrapers already acquired a macroscopically visible gloss, this was especially true for the scrapers used to scrape the hide with sand. This is not entirely surprising as it is known that flint can be polished using sand in combination with leather. The additives indeed absorbed fat from the hides and it therefore seemed that this was indeed an effective method for removing excessive fat from these skins. The use-wear traces on the scrapers still need to be studied, but the fact that they acquired macroscopically visible traces in the form of a macroscopically visible gloss and clear rounding of the edges indicates that they must attained have well developed wear traces.

After this the hides will have to be scraped again in order to remove the remaining fat. They will have to be dried, stretched and rubbed to create a kind of fat cured leather. In this case the fat inside the skin will serve to cure and preserve the skins. All the tools used in the experiments will be analyzed microscopically and the wear traces on these tools will be compared to archaeological scrapers of which the wear traces have been tentatively interpreted as being the result of scraping hides with additives. Hopefully, this will provide more insights into the hide-working processes in the Neolithic.